It’s been less than a year since The Murdock — currently The Waterfront Vancouver’s sole office building — came online, but its owners say it’s on track to hit 100 percent occupancy.

The quick leasing could be chalked up to the popularity of the waterfront, but there’s more to it than that. It fits a pattern that commercial real estate agents say they’re seeing across all of Clark County: Put simply, office space is in very high demand.

“We need more of it,” said Joanna Harrison, a broker at MAJ Commercial Real Estate. “I get anywhere from five to
10 calls per week (from companies seeking offices).” 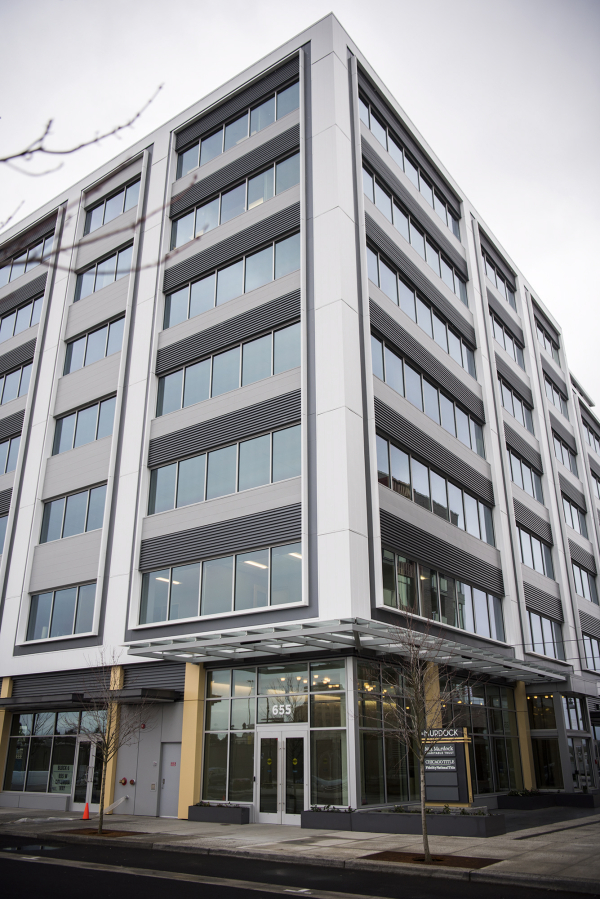 The Murdock building in February. The building opened in December and is now more than 80 percent leased. (Alisha Jucevic/The Columbian files)

The overall vacancy rate dropped consistently during that same time period, from nearly 16 percent in late 2009 to a present-day point of approximately 5.5 percent.

“We’re at an all-time low as far as vacancy rates for office space,” Harrison said.

Rents have been going up consistently as well, although the annual increase is less now than in 2016, when it peaked at about 6 percent.

Brett Irons, a broker and vice president at Fuller Group, described a similar situation at his commercial leasing agency: lease rates are rising, vacancies are low, and there isn’t enough new stock coming on to the market to keep up.

The few new office projects that have come online in recent years have been quickly filled, he said.

The Murdock’s office space is more than 80 percent leased. Despite a comparatively high lease rate, Irons said, it only has about 2,500 square feet left unclaimed.

A few blocks away, Hurley Development is constructing a six-story “office condo” building, where office tenants can buy individual floors. It’s an uncommon office model, Irons said, but that hasn’t curtailed the demand — all but one of the 7,600-square-foot floors have been pre-sold.

The pre-leasing and quick selling are partially by design, Irons and Harrison pointed out. Construction costs are high right now, and big office buildings are expensive projects. So developers tend to be wary of breaking ground until they have tenants lined up in advance for most or all of the space.

The demand is definitely there, Harrison said, but it takes time to match big tenants with developers who can agree on a common vision for a potential building.

That was what happened with the Murdock. The building is named for the M.J. Murdock Charitable Trust, which is headquartered on the top two floors. The trust was on board from the start of the development process, and developer Barry Cain has previously said that the trust’s early support was what allowed the project to get underway.

Demand for space is consistently high across all of Clark County, Harrison said, and it’s not limited to just offices; the commercial real estate sector overall is growing as an increasing number of both people and corporations look to Vancouver as a cheaper alternative to the rest of Portland.

“Retail, office, all of it,” Harrison said.

MAJ leases office space in Portland as well, and Harrison said rental rates across the river tend to be comparable at the moment, so there’s nothing in Oregon to offset the tax benefits of moving to Washington.

The west Vancouver office market is a bit hotter than the eastern market, according to Irons, due to a higher amount of supply in the Columbia Tech Center and some of the surrounding areas. But the eastern market is only soft in comparison to the central business district, he said — even on the east side, the available office space is filling.

In this type of market, brokers start to turn more of their attention from individual tenants to overall buildings, Irons said. But that can be challenging too, because a tight supply benefits landlords, who can count on high lease rates and high occupancy on their existing properties.

“It’s a challenge to get a lot of landlords to sell right now,” Irons said.

Another sign of the tight office market: Irons said he’s seen a rise in the number of office owners in Vancouver who are converting their spaces to “triple net” leases, meaning lease agreements in which the tenant is responsible for the taxes, insurance and maintenance costs associated with the property on top of the regular lease fee.

Offices traditionally use “full service” leases, where those costs are borne by the landlord, Irons said. For landlords, switching to triple net is an easier way to gauge their net operating income, but the learning curve for tenants can be frustrating, he said, especially when coupled with the office supply shortage and rising rental rates.

“We have a huge shortage of warehouse space in Clark County in general,” he said.

Lease rates for warehouse space haven’t climbed at the same rate as retail and office, he said, which combined with the high cost of construction has led to a dearth of vacancies.

Warehouse leasing prices have begun to creep up in the past year, he said, which has prompted an increase in development projects, but it’s still not enough to keep pace with the demand.

“We’re finally getting lease rates that support development, even though it’s still not there yet,” he said

Original article published at The Columbian